Back in 1988, Jack Rebney was in the process of  filming  a sales video for Winnebago.  It was hot, the bugs were out, he couldn’t remember his lines, and boy did he get frustrated. And, oh yeah, he let his frustrations out big time, often losing his temper. The outtakes from this video are laced with profanity and some very animated body language. But Jack didn’t care. That was just him venting and showing a glimpse of his high-strung personality.

While the final ad was sent out to Winnebago dealers to promote one of their new motorhomes, a 4 minute video of outtakes surfaced. Originally, this video was just passed among the crew and some friends, but eventually underground videotape collectors became aware of this hilarious reel, dubbing it “Winnebago Man”, and began copying and trading it. This led Jack to becoming somewhat of an underground cult hero.

What no one could have envisioned at the time would be the explosion of PCs, the Internet, and eventually YouTube.  Twenty years later, Jack became one of the very first viral video stars with over 2 million views on YouTube!

So, who was this Jack Rebney anyway?

Enter documentary filmmaker Ben Steinbauer, who  decided to track Rebney down and see if he would be willing to tell the story of the “Winnebago Man”. The end result looks like it’s a winner! While I haven’t seen the documentary myself yet, here are some quotes regarding the film:

“Holy sh*t, is this a f**king funny documentary!”
— Roger Ebert

Winnebago Man is now playing in select theaters around the country. Be sure to check it out!

Until next time, Happy RVing! 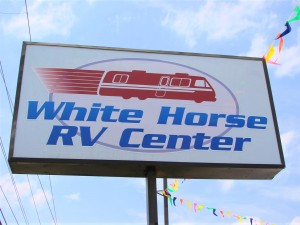 Hey There RV-ers, and welcome to our blog!

We are a family-owned, South Jersey based RV dealer dedicated to helping our customers find their perfect RV.

The goal of our blog is to keep you updated on all things RVing, and to share some fun, interesting, and useful info with our customers and followers.

For more information on our inventory, service center, or parts store please visit our website!

Thanks for visiting & Happy Camping from White Horse RV!